The secured overnight financing rate (SOFR) has been widely touted as the only viable alternative to USD Libor, which is still pitched to be faded out by the end of 2021. Recently, however, economic events have exposed serious weakness in the rate. Meanwhile alternative rates, which many believe are more suitable for specific products or markets, are gaining traction.

These include the Ameribor unsecured overnight rate, which is based on unsecured loan markets, and the US dollar ICE Bank Yield Index, which measures yields on terms of one, three and six months in the cash markets, similar to Libor.

"I believe, as many do, that there is no reason why Libor – having been a singular rate – should be replaced by a singular rate," said Christopher Giancarlo, previous chairman of the Commodity Futures Trading Commission. "If you look at almost all areas where benchmarks are prevalent, there is a range of benchmarks in all of the asset classes."

As reported by Practice Insight last month, because SOFR is based on the Treasury repurchase market (repo), it is at its mercy. In September a spike in the repo market led to SOFR soaring to an all-time high of 5.25%, and although this quickly subsided to normal levels, it led to significant consternation among market participants. One source told Practice Insight that the NY Fed "was on red alert" after the event.

In response, at the annual conference of the Securities Industry and Financial Markets Association (SIFMA) in Washington DC this November, NY Fed President and CEO John Williams told reporters that the event was not unpredictable – but it was not anticipated that so much stress could cause a spike.

"Nothing really happened. Everything that did happen on that day was predictable, except that the markets showed signs of stress," he said. There was a lot going on in the markets – big tax payments, big Treasury settlements. The surprise was the market behaviour that came out of that."

Despite this public show of faith in SOFR and its reliance on repo, concerns remain. Kurt Dew, lecturer in economics at Northeastern University, suggested shortly after the spike that this activity proved SOFR alone is not a sufficient replacement for Libor.

"Therefore, it has become a choice of which manipulated rate you prefer; Libor or SOFR. The choice is pretty clear that of the two, it would be Libor that makes the most sense," he added.

One of the reasons that Libor essentially failed and has been replaced systematically is that it is not based on real-time transactions, but formulated from opinions. One of its strengths, however, is that it has a full yield curve which gives the market the ability to borrow at rates in various time increments looking forward.

One source close to the issue who chose to remain anonymous said that because overnight rates by definition are more volatile than term rates and can have spikes, as seen in September, they are less reliable.

"The NY Fed is using its power to blow ahead and bulldoze everything to put it [SOFR] in, but it is not obvious how well it is going to work,” they added.

The industry doesn't like it, but it can't do anything about it, they explained, adding: "If you can get people to talk off the record, they will tell you they are being bullied."

The suggestion is that large parts of the market do not like SOFR because of the lack of yield curve. The Libor system had the strength of a yield curve, but its weakness was not being based on real transactions, and its manipulability.

"It has been reformed so it is supposedly less subject to manipulation. SOFR is stronger because it is based on real transactions, but weaker because it doesn't have a yield curve – they didn't find the win-win," added the source.

Regardless of whether some in the market think fixing the current iterations of Libor would be the best solution, the UK Financial Conduct Authority has instructed banks submitting rates to Libor that they no longer need to from the end of 2021.

Because of this and other reasons, Libor is no longer a true marketplace; more of an estimated market. That is what has caused so many problems over the last decade, coming out of the last crisis.

"The problem with fixing Libor is there is not a robust marketplace, so unless large money centre banks want to go back to funding overnight operations in an unsecured marketplace, the lack of activity in the market can't be fixed," said Giancarlo.

One source said that he does not even consider the continuation of Libor as an option. "The head of the FCA says he wants Libor to go away. Even if banks still support it I am not going to argue with the head of the FCA," he said.

"The macro question on the table is if it better for the system to have just one benchmark that is supported by a deep market, the repo market, or if it’s better to have multiple benchmarks to suit multiple economic needs, knowing that the bank funding market is inevitably going to be less liquid than the overnight repo market," he said, suggesting that the market has already spoken via its relatively slow uptake of the new rate.

"The market is not going to transition on its own. It is going to have to be forced to transition. If SOFR was a better rate and the market was more comfortable with it on a standalone basis, the transition would have made a lot more progress to date," he said.

For example, banks that are being told to transition clients from Libor to SOFR-based loans will find a desire for more spread to hedge their downside. The client is going to look at it as if the banker is trying to take money from them, especially if Libor remains cheaper than SOFR and can spike. This scenario will be a hard sell for clients.

Given the apparent frailties of SOFR as a standalone replacement rate, the next question is if other options are more appropriate. Several sources told Practice Insight that replacing USD Libor with only one rate would be a mistake, pointing to other areas where no one single benchmark exists that serves different requirements, like agriculture.

"That’s a question that economists must ask. We need a portfolio of choices and the markets will sort out how many there should be," said Richard Sandor, chairman and CEO of the American Financial Exchange (AFX), which publishes the unsecured rate Ameribor. "As a student of economics, I vote for choice."

"Ameribor is a different benchmark because it has a credit component, while SOFR is a risk-free rate. SOFR is good and has all the merits a risk-free rate should have, but it is more associated with the risk-free markets."

The interest rate benchmark reflects the actual unsecured borrowing costs of more than a thousand US banks and other financial institutions, largely community and regional banks that typically lend to smaller institutions.

It is growing because of organic demand from non-primary dealer banks to be able to lend and borrow in an unsecured market which is complementary to the way in which they conduct their own lending activities.

Sandor added that AFX endorses both because of the different characteristics they embody.  "They are complementary and one is not a substitute for the other. Having two rates eliminates basis risk," he said.

The US Dollar ICE Bank Yield Index, too, could work in conjunction with SOFR, and is not pushed as a direct alternative. The index is forward-looking and credit-sensitive, and as a benchmark tool looks at the yield of unsecured bank paper in the primary markets and the secondary market for tenures of one month, three months and six months. Essentially it is a similar economic exercise to one, three and six-month Libor.

"It is a complement to SOFR," said the source. "SOFR might be a bad rate for lending, but it is a very good rate for derivatives."

When executing swaps or other derivatives that have no nexus to lending activity, many would prefer to use an overnight rate within the context of cash collateral.

"It was a mistake for the financial system to have one rate, and that be the rate for everything. It was just a fluke that Libor was embedded in everything. If you rewind the clock 20 years when the derivatives markets started to move outside of banks and corporates and started to include hedge funds and asset managers, the dealers were just lazy and embedded Libor into everything," he added.

Instead, he explained, dealers should have put Fed funds as the floating option for total return swaps, long duration swaps and other derivatives activity that had no nexus whatsoever to lending. "The whole thing would never have been an issue had the markets that aren't related to lending activity just used Fed funds. The fact that the derivatives market was used for punting or liability-driven investment hedging or total return swaps is what caused these issues in the first place." 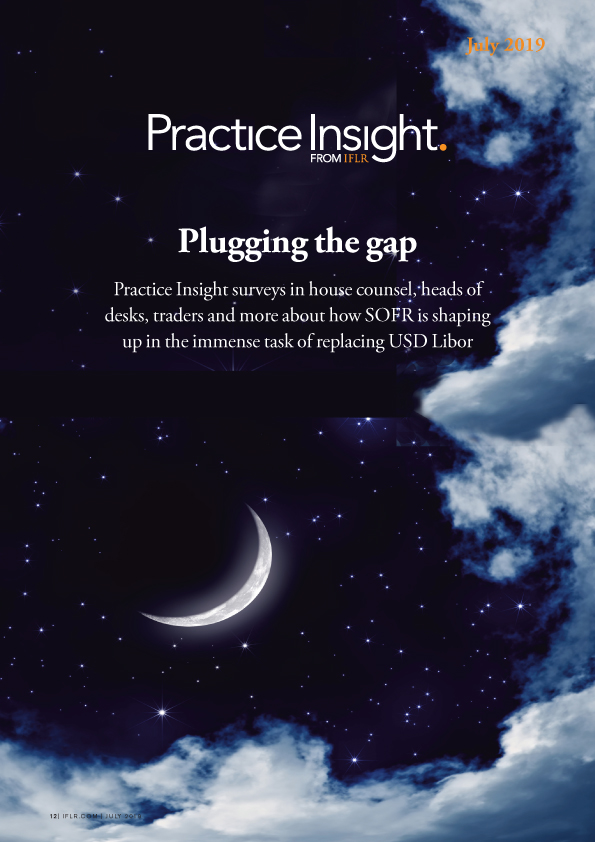 Thank you for printing this article from Practice Insight.

If you have been given this article by a subscriber, you can contact us through www.iflrinsight.com/sign-in, or call our London office on +44 (0)20 7779 8870 to discuss our subscription options.